The sigh of relief, however, came a bit too soon-Amherst would score one more run against Bates in game one of the doubleheader, but the Bobcats shut down the Jeffs in game two, 4-0, and Amherst proceeded to drop the next four games on its (fortunately non-conference) schedule. What has changed for Amherst since Florida? The hits are still coming, albeit not as quickly nor always strung together, and the pitching remains solid, especially on the part of Warner, who has given up all of three earned runs in 21 innings since returning from break.

The Jeffs have a few theories regarding this early-season slump. “We are a great team, but in the last few games we were tenative both in the field and at the plate,” said Warner.

“One of the things that [Head Coach] Sue [Everden] mentioned is that up here [in Amherst] we have so many other things going on in our lives, and it’s harder to maintain the focus we had in Florida,” said outfielder Rachel Hoerger ’06. “But it also seems that people, in a sense, are too on edge.”

Added senior co-captain outfielder Greta Anderson, “Our baserunning needs some work as does our ability to recover from errors. We weren’t used to things going wrong in Florida, so if we made an error up here we had trouble putting it behind us.”

A variety of factors, from mentality to the weather, have conspired to slow down Amherst’s quest to qualify for the NESCAC Tournament for the first time since 2002. Though the Jeffs were off to their best start since 2001, going 5-2-1 in Florida, they have gone 1-4 since. Opponents have outscored Amherst 20-11, a sharp contrast from the Florida trip in which Amherst gave up a paltry six runs in eight games while scoring 42 of its own.

Amherst did manage to retain Florida form in its first game against Bates on March 26. In the team’s first home game of the year, the Jeffs treated an enthusiastic home crowd to an exemplary performance. The indomitable Warner struck out an incredible 15 batters while giving up just two hits and one walk. Amherst’s defense did what little there was to be done with aplomb, making no errors behind its ace. The offense, while lacking in explosiveness, produced three runs on seven hits. More remarkable is that only three Amherst batters struck out-the Jeffs, who stranded 10 runners on base, really forced Bobcat pitcher Sarah Klenakis to work for all 27 outs.

Amherst had more trouble with Bates’ second pitcher, Kristin Masino, who surrendered just three hits to the Jeffs while striking out four. Both teams left six runners on base, but it was the Bobcats who produced on offense, scoring four runs, just one of them earned. Leadoff batter and right fielder Elizabeth Neckes ’08 had all three hits for the Jeffs, going a perfect 3-3. Indeed, in the bottom of the first inning it looked as if Neckes would score. The rookie hit a hard single past the Bobcats’ shortstop and advanced to second when shortstop Annalise Rodli ’07 was hit by a pitch. Neckes and Rodli advanced on a groundout, but with runners on second and third and just one out, the Jeffs missed out on what was to be their best opportunity of the game. Third baseman Caroline Polales ’07 hit a hard groundball to short, and Neckes, who had run on contact, was thrown out in a close play at the plate. The final batter of the inning, rookie second baseman Ralina Shaw, struck out.

The missed opportunity seemed to take the wind out of Amherst’s sails. Sophomore pitcher Hilary Little walked the first batter of the inning, and while Rodli managed to get the lead runner out at second on a fielder’s choice, a subsequent steal and a pair of infield errors with two outs and runners on base let a pair of Bates runs score without a hit. Little pitched a solid five innings but took the loss, giving up one earned run and striking out four while walking two. Rookie pitcher Samantha Miller threw ably in relief, striking out the side twice while giving up just one hit; unfortunately for the Jeffs, Miller’s performance came too little, too late.

Bad weather postponed Amherst’s March 28 game against Smith College to March 31, forcing the Jeffs to play three games over two days in the middle of the week. Perhaps focus was what was lacking for Amherst, as the Jeffs dropped both halves of a doubleheader at Worcester Polytechnic Institute (WPI) on March 30 before falling to Smith the next day.

Warner’s performance on the rubber against WPI was once again excellent, although the junior hurler did surrender her first earned run of the year in the first inning after a whopping 37 innings of 0.00 ERA. Warner took the 2-1 loss, giving up five hits and striking out 11.

“She’s pitching as solidly as ever,” said Hoerger. “We’re just not giving her the backup and run support she had in Florida.”

Neckes scored Amherst’s only run on a botched run-down between third and home.

In the second game, it looked like the Jeffs were going to halt their two-game slide. Amherst led 4-0 in the top of the sixth, but WPI scored nine in the bottom of the inning to win, 9-5. The offensive highlights of the day came courtesy of rookie Laura Smith, who hit three singles with two RBIs and one run scored in both games. “Smith hit with a vengeance against WPI,” said Hoerger.

The next day, the Jeffs traveled to nearby Northampton to face Pioneer Valley rivals the Smith Pioneers. Though the scoreboard read Smith 5, Amherst 2 at the end, the Jeffs were never really in contention. Smith pitcher Erica Hubbard had a perfect game going into the top of the seventh, when she walked batter number 19, Rodli, before giving up hits to Polales-an RBI double-and Shaw-an RBI single. Warner took her second loss of the year for Amherst, giving up two earned runs and striking out nine over six innings. Amherst fell to 6-6-1 with the loss, and after this weekend’s doubleheader fell victim to the rain, the Jeffs’ record stands at .500 going into conference play.

Things are not as bleak as they may appear. None of these games need matter-all five were non-conference (Bates is in the NESCAC’s East division while Amherst is in the West). This weekend, however, is truly do-or-die for the Jeffs as they host four NESCAC games over two days. On Saturday, Amherst plays host to Wesleyan University for a 12 p.m. doubleheader, and on Sunday the Jeffs make up their doubleheader against the Hamilton College Continentals at 1 p.m. Tomorrow Amherst hosts Wellesley College in an after-school special at 3:30 p.m. However, as the Jeffs know, the Wellesley game will merely be a rehearsal for the big shows of the upcoming weekend.

Perhaps as the weather warms up Amherst will get back on track and recapture the success of the Florida trip.

“Our goal for this week is to play with the same confidence we had in Florida. If we do that I really believe that we can win all five games,” said Warner.

The Mammoths completed their regular season with some very impressive results at the Connecticut College Invitational in Waterford, CT. These results are promising for when both the Men’s and Women’s Cross Country teams will be competing in the NESCAC championships in two weeks. 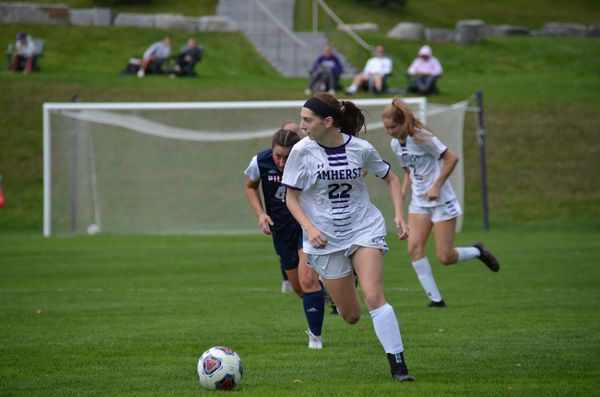 Women’s soccer has proved to be unstoppable, putting two more wins under their belt this weekend. On Saturday, the team took down Tufts in an overtime nail-biter, and finished the weekend with a 3-0 shutout to move to 11-1-1.

Men’s soccer barely fell short in its toughest test of the season so far, losing 2-1 to No. 3 Tufts on Saturday, Oct. 16 on a set-piece goal in the third-to-last minute of double overtime.