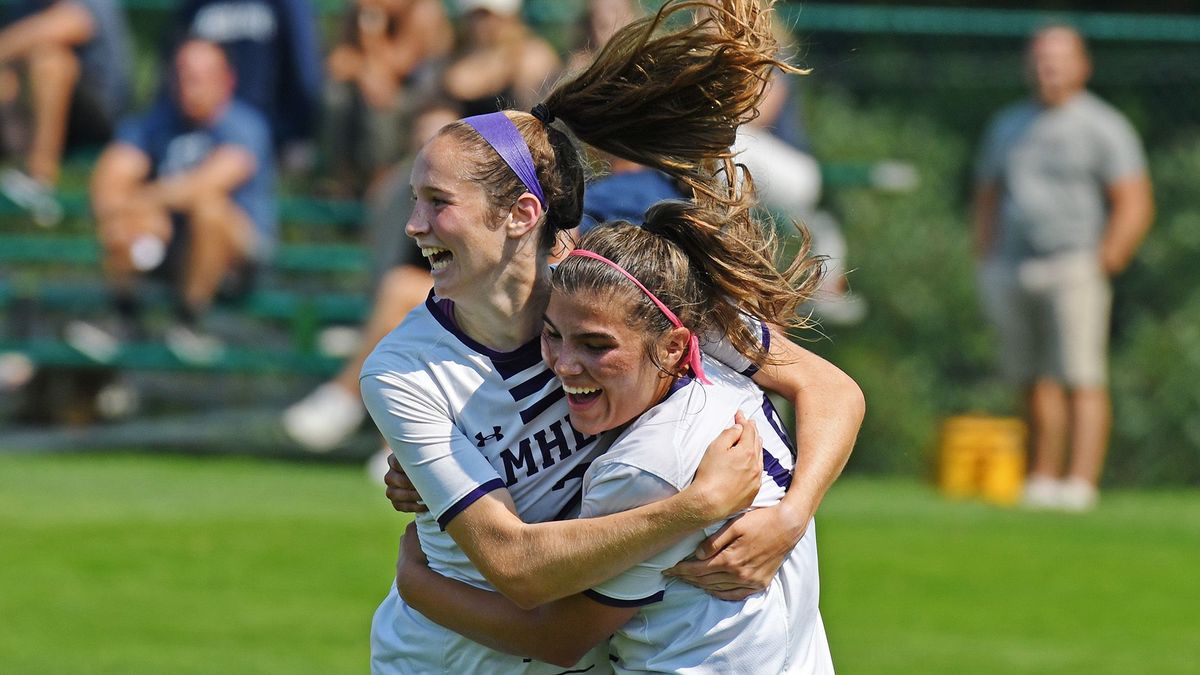 The Mammoths began their 2022 campaign on Wednesday, Sept. 7, against local competition, the Springfield College Pride. While Amherst dominated the ball in the first half, Springfield held their own, and the Mammoths were unable to put the ball in the back of the net for some time. But after almost 43 minutes had elapsed, Abby Schwartz ’24 found (managing sports editor) Liza Katz ’24 for a clinical tap-in to open up the scoring. Despite scoring so late, right before the end of the first half, the goals did not stop coming once they started.

While Springfield immediately bounced back with a goal from midfielder Katie Vita, Amherst responded in kind. The move started with a beautiful ball in behind the defense from Alexa Juarez ’23E that found the feet of Schwartz. After Springfield’s goalkeeper was unable to hold on to her first shot on goal, Schwartz put away her own rebound to put the Mammoths back on top 2-1. Only two minutes later, Schwartz notched her second of the day, using all of her 5-foot-10 frame to tower over her defender and convert an incredible cross from Ella Johnson ’26 into a third goal for Amherst. While the Pride were able to score off a saved penalty in the 61st minute, the Mammoths staved off their comeback attempt with goals from Sierra Rosado ’25 and Sarah Sullivan ’23, opening their 2022 account with a 5-2 win.

Just three days later, on Saturday, Sept. 10, the Mammoths hosted their first NESCAC game of the season, facing off against then-No. 23 Middlebury in an important early-season contest. The Juarez-to-Schwartz connection landed the first goal of the game, after Juarez fought off three defenders and avoided the sideline to play a ball into the box for the team’s leading scorer to easily finish. Six minutes later, Katz got her second of the season when a saved set piece rolled to her feet outside the box for an upper-90 lob over Middlebury’s goalie. Nevertheless, Middlebury held its own, immediately scoring to start off the second half and drop the Mammoths’ lead to one. That wouldn’t last long, though. After the Panthers misplayed a pass from the back, senior Isabel Stern ’23 pounced on the opportunity and slammed the ball into the back of the net for the game’s third goal. A few minutes later, Schwartz showed off another element of her game by beating the last Panther defender on the dribble and then passing the ball to classmate Ally Deegan ’24 for an easy finish in a two-on-one against Middlebury’s goalkeeper. With eight saves of her own, Mika Fisher ’24 played a key role in preventing the Panthers from making any legitimate comeback. While Middlebury scored two late goals, it was not enough, and Amherst came out victorious, 4-3.

Amherst's third opponent in five days, Smith College, proved to have a tougher defense than their previous two opponents. Thirty minutes in, the Mammoths had eight shots on goal but the score was still 0-0. Right after being subbed into the game, Deegan found herself in the perfect position to head in Katz’s flawless corner kick, scoring with her first touch of the day to make it 1-0. Schwartz then added to her goal tally yet again, doubling the lead off of a clean cross from sophomore forward Patience Kum ’25 after a beautiful display of passing from the Mammoths. The rest of the game featured a battery of shot attempts by the Mammoths — totaling 16 by the end of the game — but they were to no avail. A composed finish from Smith’s Riley McKenna brought the score to 2-1 with five minutes to go, but Amherst prevailed in the end.

With a total of four goals and two assists in three games this week, Schwartz was named the NESCAC Player of the Week for her contributions to the Mammoths’ perfect start. Always humble, Schwartz gave much of the credit to her team, saying, “I couldn’t have done it without y’all [the team].” That support has shown on the scoresheet: Five other Mammoths have scored so far this season, and three players — Schwartz, Katz, and Deegan — have multiple goals.

That team play has translated to a massive jump in the national rankings: the Mammoths climbed 14 spots in the United Soccer Coaches rankings, jumping up to No. 4 (from No. 18) in the latest poll.

Looking forward, the Mammoths’ next match comes against Tufts at Hitchcock Field this Saturday, Sept. 17, where the reigning NESCAC Player of the Week and her team hope to record a fourth win in a row. Kickoff against the Jumbos is at noon.

Around the Herd provides quick updates on all the Amherst sports action you may have missed in the past week. In this week’s installment: field hockey flourishes, both golf teams thrive, and women’s tennis concludes their fall season.
Staff writer Maya Reiner ’25 provides a look into the life of dual-sport athletes, including personal details from two-sport athletes Muffie Mazambani ’24 and Jacob Bruno ’25E.
The men’s and women’s golf teams opened their 2021 seasons this past weekend at the Hamilton Spring Shootout, a one-day tournament at the Skenandoa Golf Club in Clinton, New York. In addition to Amherst, Hamilton College, Williams College, and Middlebury College also participated in the event. The women’